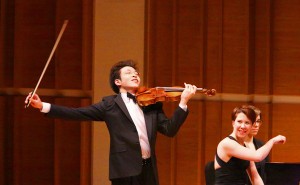 A Debut With a Proustian Touch.

The violinist Paul Huang’s Francophile New York recital debut on Tuesday evening at Merkin Concert Hall had an unlikely literary connection. When Mr. Huang, 22, played the Saint-Saëns sonata on Tuesday, his sound was not far from the “slender but robust, compact and commanding” tone described by Proust.

A Treat from Violin and Piano

Paul Huang has some serious chops. He's an extremely talented young violinist and, based upon his concert Sunday afternoon, is someone who may very well develop into a great artist.